Since it was a while since the release of GNOME 40, I thought it might be time again for a post.

Since the 40.0 release there's just been a bug fix release (40.1) where, among other things, a bug where toggling a place as a favorite and then “unfavoring” it again, made it impossible to select that place again until restarting Maps.

And in master, leading towards 41 there's also been some goings-on.

First, one issue that was brought to our attention was that since we've used the star icon both for the favorites menu button in the header bar and for the button to mark a place as a favorite in a “place bubble” and this get a bit confusing when the new adaptive mobile mode is active. Since in this case the favorite button moves to the bottom bar and this lines up the favorite button in the place bar shown above that when selecting a place.

So, to mitigate this we decided to adopt the same bookmark icon as used in GNOME Web (Epiphany) for the favorites menu button to keep them apart. 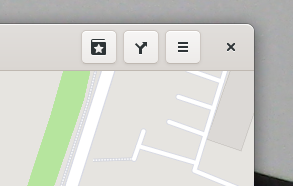 And when in the mobile “narrow mode”: 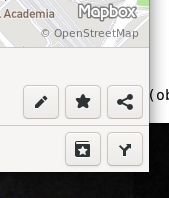 Here, the buttons can be seen horizontally aligned, with the top one being the button to mark the place as a favorite.

An overhaul of the search result icons

For the icons shown in the search results list we always relied on the icons provided by the libgeocode-glib library. This has had some issues, however. For one this icon set is quite limited, so most places has just received a generic pin icon.

So now these have all been replaced with fresh new icons from the GNOME icon catalog:

Jakub Steiner also drew up some brand new icons for, among other things cafes (shown above), pubs, bars, cities, and towns.

In contrast to the old icons, which didn't look to great against a dark background:

Furthermore, bus stops, train stations, and similar will now use the same icons as where already used to render journey plans, so this looks more consistent

I also couldn't resist adding a bit a fun as well, so now zoos get this little penguin icon:

I also added validation for Wikipedia references when editing places. So now it will warn you if the reference does not follow the style language-code:Article title (such as “en:Article title“ for example). 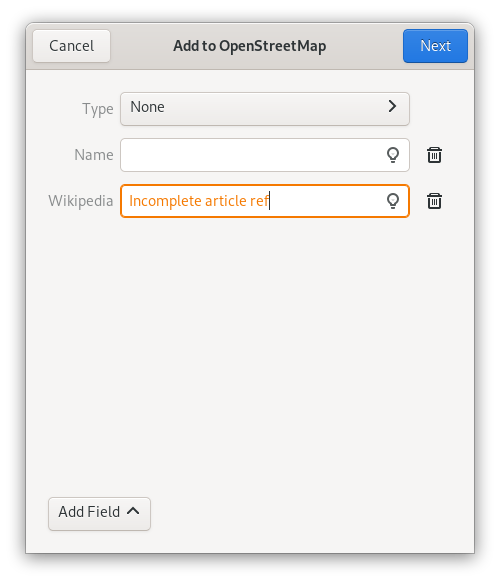 The light bubble, as before, will show a hint explaining the format. And still  like before you can also paste in a URL from Wikipedia, and it will automagically re-format it, so for exmple it converts https://en.wikipedia.org/wiki/The_article_title → en:The article title.

And over in libshumate (the new library we're working on to enable migrating to GTK 4.x and away from using Clutter) Georges Basile Stavracas Neto and James Westman has been working on a number of improvments. So that now smooth scrolling works (meaning that when you let go of the mouse or touch pad gesture while in motion the map view continues moving a bit with inertia) and fractional scaled zooming that will be built upon later on when adding support for smooth animated zoom and pinch gestures for touch screens.

And that's that until next time!

Posted by Marcus Lundblad at 10:41 PM