As I was quite busy during the days before Christmas this year I didn't get time to write the traditional holidays Maps blog post.

So I thought I should at least write a quick wrap-up of the happenings during 2022 before the end-of-year.

As always, we started out in spring with a new major release along the spring GNOME release (42.0).

In 42.0 (or rather during the development cycle leading up to it) Maps gained support for using the development profile, so that you can install nightly snapshot releases from the GNOME nightly Flatpak repo (or using locally-built bundles) in parallell with a stable release (using the Flathub release or from a „traditional“ distro package). 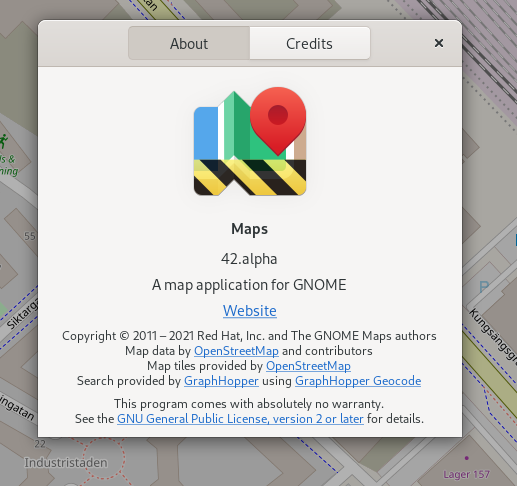 Like for other apps, the icon for the development release is distinguished by the „bio hazard stripe“.

Also in the 42.0 release, support for the maps: URI scheme was added. Using this a link can constructed that when opened will initiate a search using the encoded search term in Maps. This is now used by Contacts when a contact in the address book has an address set. There is also a DBus API for performing searches.

Later during spring, after the 42 release some additional spring cleaning was made.

Support for social media check-in was removed (and along with it the dependency on gnome-online-accounts). The one remaining implementation for Foursquare had not been working that reliably (and hasn't been widely used), and also the other implementation (for Facebook) had been removed one release before, and had been broken for a few years due to upstream API changes.

This was also done to get remove some mostly unused UI to get less code to port to GTK 4.

Another change was changing the process for performing OAuth setup for editing POIs in OpenStreetMap. Previously we had handled username and password locally and programmatically posted the OAuth authorization forms using a ported variant of the same code used by JOSM.

As this method is not really best-practice for doing OAuth sign-up, and this had already at one point been broken and needed fix due to changes on the server-side this was then rewritten to hand off the authorizing to use an external web browser. 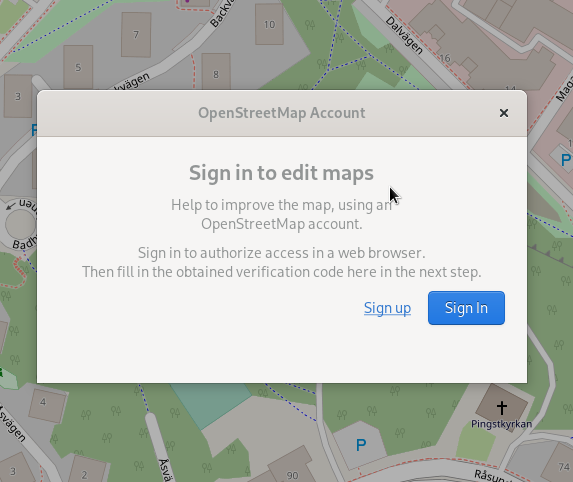 This has taken inspiration from how Cawbird implements signing in to Twitter.

Then in late June it became appearent that  due to other dependencies migrating to libsoup 3 (for HTTP request support) maintaining Maps using GTK 3, libchamplain (depending on libsoup 2.x) for GNOME 43 was looking impossible.

So, it seemed a last-minute port to use GTK 4 and our new libshumate map rendering library (based on the GTK 4 scene graph) should be attempted, even though the schedule was getting a bit tight…

But after some additional bumps (such as porting the OSM loging to use OAuth 2 due to needing to port to a new version of librest) and some frantic summer coding nights, just in time for GNOME 43 it was in working (good enough) condition. 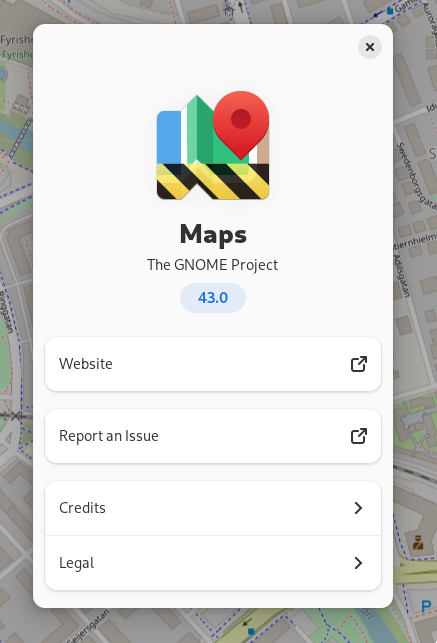 Christopher Davis helped port the about window to use the new libadwaita version of the dialog. He also did some additional clean-ups after the GTK 4 port.

This release also involved settling on the API/ABI for libshumate and declare it as 1.0.0.

Following the release, I have also done some post-port mending to fix some brokenness left after the port.

Among the fixes, the „place bubbles“ has been fixed to get rid of the extraneous margin that unintentionally got there after the port (due to GtkPopover widgets behaving differently, they where special-cased in GTK 3 when it comes to applying the CSS spacing rules).

So after this fix the place image (when there is one) is now again „flush on“ with edge. 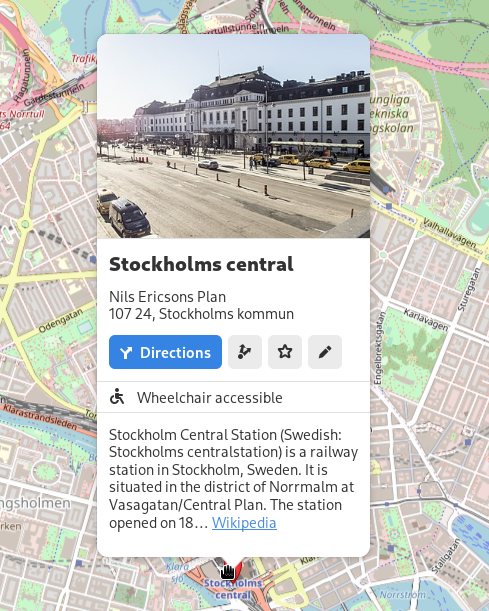 This is available in the latest Maps release (43.2).

James Westman has also been working on fixing some performance issues and memory leaks in libshumate (that has been backported to the 1.0 branch, currently the stable version released is 1.0.3).

James has also been continuing improving the vector tile support in libshumate.

I also took the time to implement one additional feature for the new major release (44.0).

Now Maps supports fetching the thumbnail and Wikipedia article extract when a place has a tag referring to an entry in Wikidata.

It is also now possible to edit those when editing a POI (and the Wikidata tag can be  „fetched“ semi-automatically when a Wikipedia article tag is filled in by pressing a reload button.

That's it for now. I said it was going to be a quick wrap-up, but I guess it got some length to it after all!

Posted by Marcus Lundblad at 11:19 PM