Excursions: The Seven Bridges of Königsberg

Making a little test with a new kind of blog post format where I explore some interesting fact related to geography and some history and fact around it.

For this first one I was going to take a look at the mathematical problem involving the bridges of Königsberg (present day Kaliningrad).

I have an old mathematical chart that I got from my father: 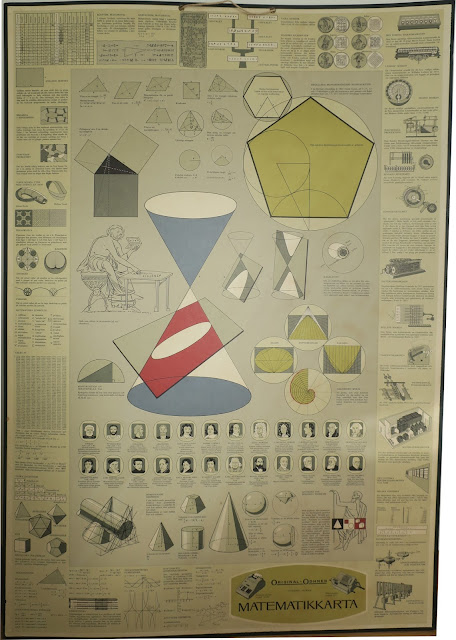 I used to study this a lot growing up and I recently was a bit curious as to when it was actually issued. The chart was issued by a company called Original-Odhner (https://sv.wikipedia.org/wiki/Original-Odhner, there is no English article in Wikipedia for it…) and doing some more research I found a mention of this chart in an old issue of a technical magazine called “Teknisk Tidskrift” from 1959 (http://runeberg.org/tektid/1959/0026.html) where the chart is mentioned as being recently published, so that should put it around 1959, or perhaps 1958.
In any case, up near the top left corner there is a description of this topological problem outlined above: 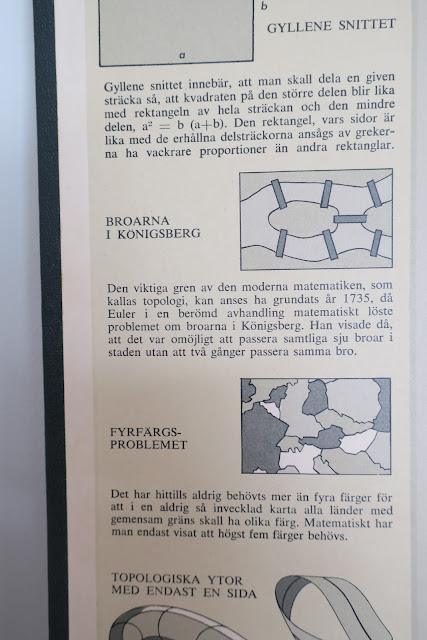 So, the subject of this post is the problem with the seven bridges of Königsberg in what was back in Leonard Euler's days in the 18th century Prussia (nowadays Kaliningrad, today a Russian enclave surrounded by Lithuania and Poland). In those days the two islands of city was connected by seven bridges and a common passtime of the recidents was to try to come up with a way of performing a walk crossing all the bridges, but only cross each bridge of time (https://en.wikipedia.org/wiki/Seven_Bridges_of_K%C3%B6nigsberg)
Euler managed to prove in 1736 that this is a mathematically impossible problem. Part of the solution involved the abstraction of the problem into one of a pure graph. Thus ignoring the choice of paths in areas on land and the islands, between the bridges. Being irrelevant (for the solution of this specific problem). And this is a very important observation. The same principle applies for the algorithms we use today for finding shortest or quickest routes. By treating the way segments as edges in a graph with weights (corresponding to e.g. distance, time required, or other significant parameters ranking preferred characteristics) ignoring things like the actual bends and twists between each intersection where a choice of direction needs to be taken.
To conclude this, we could take a virtual excursion to present-day Kaliningrad. 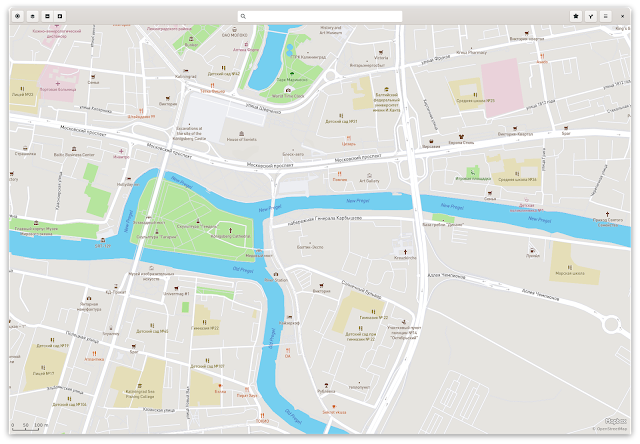 The central island that the town center in Euler's days, is now a park (it was devastated during WWII) 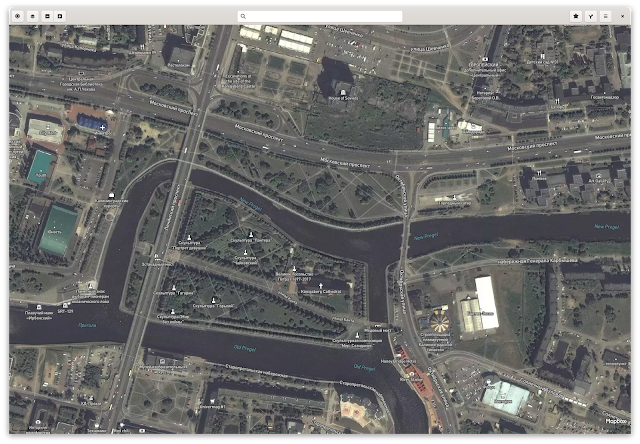 Of the original seven bridges of the old puzzel, five remain in their position today (only two seems to be the original ones from 1736). And incidentally one can actually make an equivalent walk today, using the present day bridges. 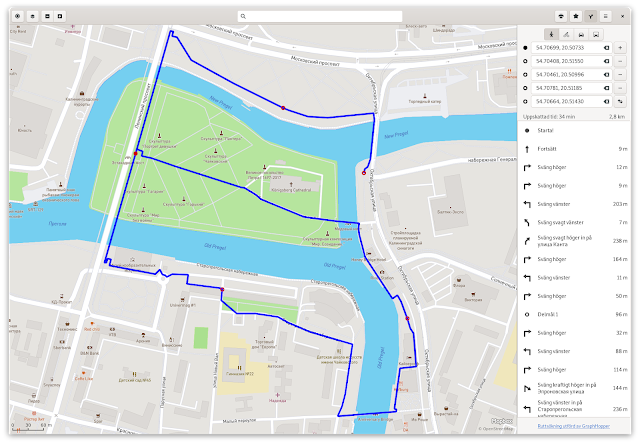 Hope you liked this form of post, and maybe somebody has ideas for other places and stories to explore!
Posted by Marcus Lundblad at 10:38 PM