It's been a while since the last blog post and it's been a while since 3.38.0 was released, and in fact there was already the stable on-schedule 3.38.1 release. On top of that a sneaky asynchronous programming bug showed up that in some circumstances such as high-latency connections, or fast typing can give out-of-sync search results I cut an extra 3.38.1.1 patch release.

But now to the summary of the 3.38 user-facing changes. I think all of this has been covered in previous posts, but I guess it's always nice with a bit of a summary.

For one thing, we now have a night mode, utilizing Mapbox' dark tile set: 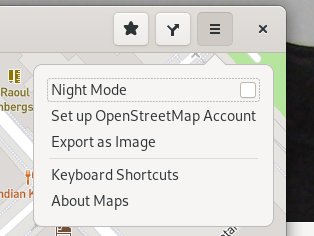 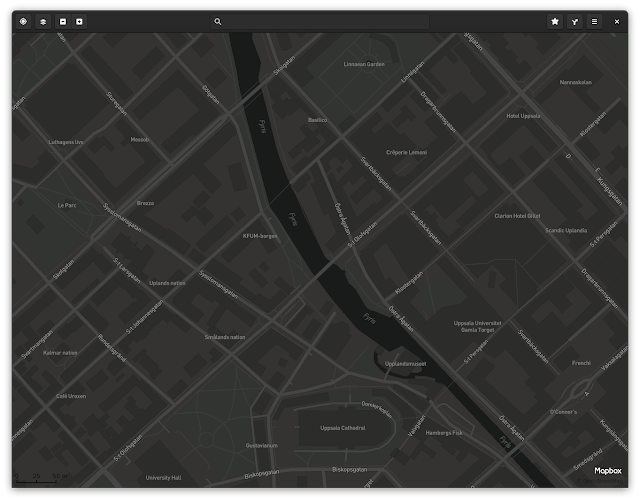 Another feature that had been requested for quite some times was hybrid aerial mode (showing labels for street names, names of places and so on): 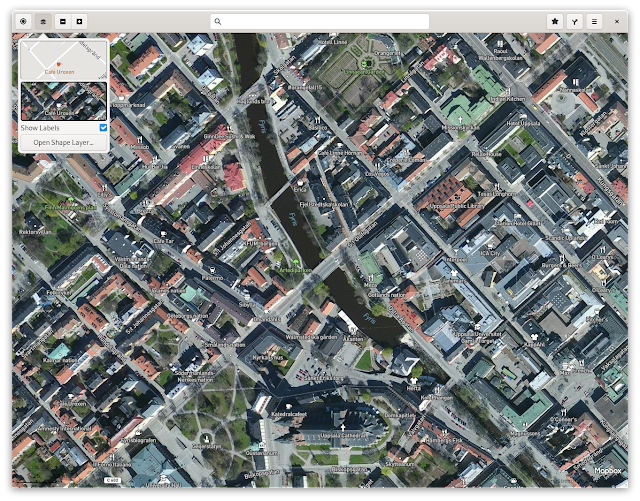 And thanks to work by James Westman the first step towards an adaptive UI (for e.g. smaller screen scenarios) has been implemented where a bottom action bar appears “taking over” some of the buttons from the header bar, leaving the search entry and main menu in narrow mode.

And video of the feature in real life says more than pictures here:

We had also planned to make the routing sidebar adaptive for 3.38, enabling it to take over the view (with a back button, as in other similar phone-enabled UIs) when in narrow mode, by utilizing the adaptive widgets from libhandy. But unfortunately some issues showed up under Wayland with some graphics driver (related to Clutter), so we had to roll back this before the release.

And stay tuned for updates on upcoming stuff for GNOME 40!

Posted by Marcus Lundblad at 10:39 PM