To stick to the tradition I thought that I should write a little post about what's been going on since the stable 3.34 release in September. The main thing that's come since then for the upcoming 3.36 release is support for getting public transit route/itinerary planning using third-party providers. The basic support for public transit routing, based on OpenTripPlanner has been in place since 2017 with the original plan to find funding/hosting to set up a GNOME-specific instance of OTP fed with a curated set of GTFS feed. But since this plan didn't come to fruition, I repurposed the existing support so that it can fetch a list of known providers with defined geographical regions. First by utilising the existing OpenTripPlanner implementation (but rewritten to be instanciated per third-party provider). Later I have added plugins for the Swedish Resrobot and Swiss opendata.ch online API. These have yet not been activated in the service file (it's using the same service file as for tile and search providers). But this will soon be there, so stay tuned.

And since it kinda mandatory with a screenshot, here's one showing a case from Paris: 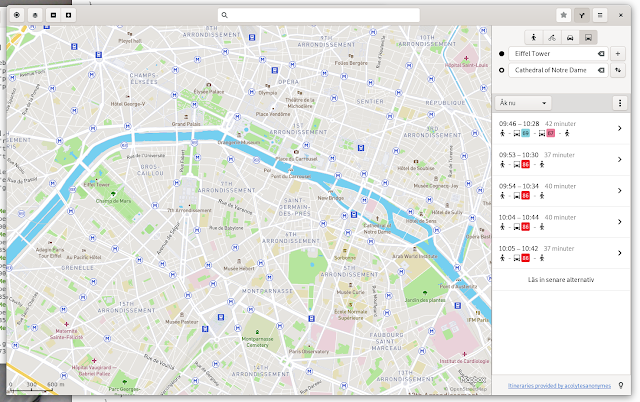