I've already covered other news earlier, such as “search-as-you-type” auto-complete search and the new sharing dialog, allowing opening locations with any application capable of handling geo: URIs. I also implemented support for opening URLs pointing to objects in OpenStreetMap directly in Maps. This can be handy in cases when someone pastes such a URL in a chat for example (and the new sharing dialog allows to copy the same type of URL to the clipboard, or as an e-mail).

James Westman has also implemented a change in how startup works, so that Maps now will open directly at the location you last viewed, instead of starting from a view of the entire world and then animating to the location. We now also remember the map type as set when closing the app the last time (“normal” or aerial view).

Another thing (that is also already available in older versions as well) is that we have updated the tile style we use from MapBox. 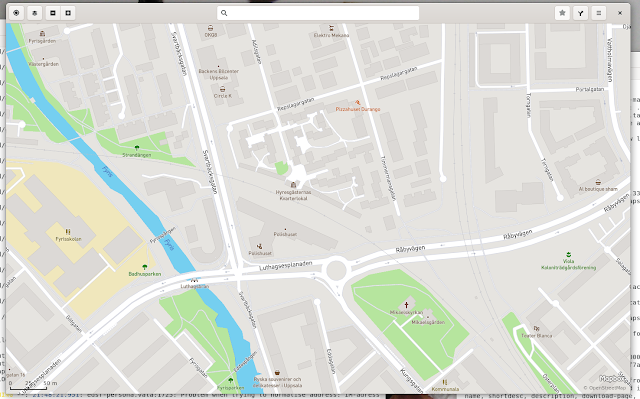 I also started working on an idea I've been thinking about for a while, but that will not come in 3.34, so more on that later…

And one last thing, I also sneaked in a small little hidden feature for 3.34, let's see if anyone finds it… 😎
Posted by Marcus Lundblad at 10:06 PM