Since it's been kindof a tradition for me to do some blogging around midsomer, I thought we might as well keep with that tradition this year as well… And there's been some nice news in latest beta release of Maps, 3.33.3.

First James Westman has implemented a new improved “Send to” dialog, as the old one had some problems. The way it interacted with the Clocks and Weather apps was a bit strange, adding the exact place (let's say a shop or a pub) as an entry in e.g. Weather, which is most likely not what the user intended. So the new dialog will offer to add the nearest city (or rather METAR weather station): 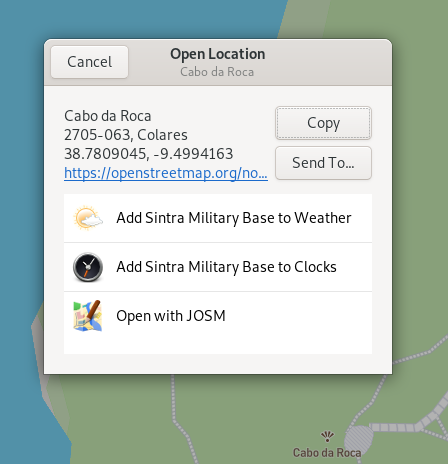 It also includes a summary with the name and address of the place, it's raw coordinates, and a link to the corresponding raw object in the OpenStreetMap database  as well as buttons to copy this information to the clipboard to be able to paste it elsewhere and also a button to initiate an e-mail message using the default e-mail client with this information, and the title of the place as the subject. Furhermore, along with the entries to add the nearby location to the Weather and Clocks apps, additionally if you have other apps capable of opening geo: URIs, they will appear at the end. In the case above I have JOSM (an OpenStreetMap editor written in Java, allowing nitty-gritty editing of OpenStreetMap data), so selecting that would open an area centered around this location in that app (however I also discovered a couple of bugs in JOSM's geo: handling, so you'll need their latest snapshot release for it to work).

Along with this, I started tinkering with allowing to enter the OpenStreetMap URL as a search term in Maps, so that you could open such URLs directly, without resorting to a browser. Ideally I would have liked if it was somehow possible to register as some kind of “partial” URL handler for http(s) restricted to certain patterns, but this is not currently possible with the mime support we have. So that would seems like a distant dream for now… Oh, and a somewhat crazy idea might be to attempt grocking some (subset) of Google Maps URLs.

The other big thing is that I completely rewrote the search engine, so now it uses either GraphHopper's API, or the search API of the Photon project. GraphHopper also uses Photon, but using their legacy API layer. The reason I implemented support for both is that GraphHopper was fine with using their service. The good thing is that quite a lot of the JSON parsing could be handle by a common module. And I also made it so that the search provider is auto-configured through the service file, so when/if GraphHopper switches to standard Photon, we can switch, and existing Maps clients will automagically use the new endpoint. Or if we want to change provider, that could also be done seamlessly this way.

What's more is that this finally gives us “search-as-you-type”, and this is something that calls for a video:


Thanks to the dynamic service file, it was also possible add attribution information that shows in the ”About“ box: 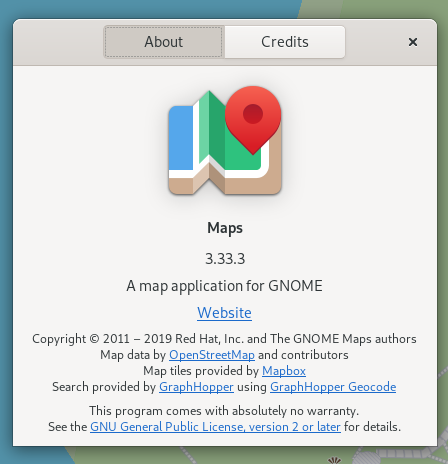 This is a pretty nice thing to do, I think.

And there was also time to fix a 4-odd year old bug, namely that in turn-by-turn routing our icons for roundabout navigation where always showing counter-clockwise variants. This has now been rectified to use clockwise variants for locations in drive-on-the-left countries/territories: 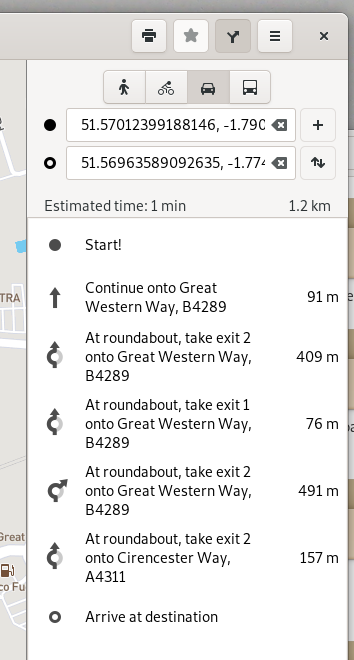 
Not only those things, I also got around to fix an old, actually crashing bug when a user has more than some 250 contacts with addresses associated in their Evolution address book (such as when coupling with an enterprize Exchange server.