So, a couple of days ago the GNOME 3.32 release came out and I thought I should share something about the news on the Maps side of things, although I think most of this has been covered in previous posts.

First up we have gotten a new application icon as part of the major overhaul of the icon style. Furthermore the application menu has been moved into a “hamburger menu” inside the main window, in-line with the other applications in the desktop. This goes hand-in-hand with the gnome-shell top bar application menu not showing this application-specified menu anymore, since it was considered not too intuitive and also few third-party apps utilized it. But I'm pleased to see that the icon of the currently focused app is still shown in the topbar, as I think this is a good visual cue there. 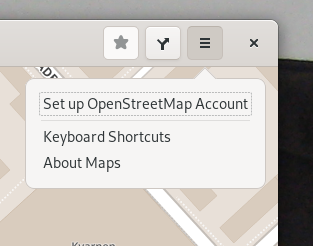 And the other notable UI-wise fix is showing live-updated thumbnails for the in the layer selection menu for the buttons to switch between map and aerial view (contributed by James Westman). 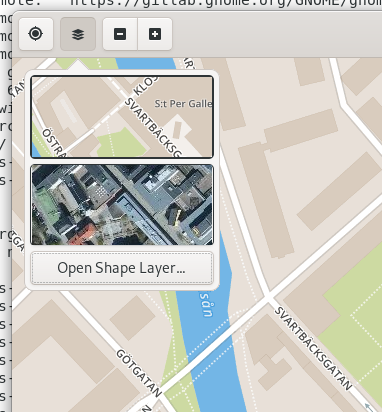 These screenshots also shows some glimpses of the new GTK theme, which I think is pretty sleek, so well done the designers!

There's also been some under-the-hood fixes for silencing some compiler warnings (for the C glue library) contributed by Debarshi Ray.

Looking forward I started work on an issue that has been laying around in the bug tracker since I registered it around two years ago (tagged with the “newcomers” tag in the hopes someone would take it on :) ) that is about the we use a GtkOffscreenWindow to render the output when generating printouts of a routing search. This was done by instantiating the same widgets used to render the route instructions in the routing sidebar and the attaching this to an offscreen window to render them to bitmaps. But as this method will not work with GTK 4 (due to a different rendering architecture) this has to eventually be rewritten. So I started rewriting this code to directly use Cairo and Pango to render the icons and text strings for the printed instructions. And there's some gotchas with layouting and right-to-left locales, but this far I think it's working out right for the turn-based routes as shown by the these screenshots. 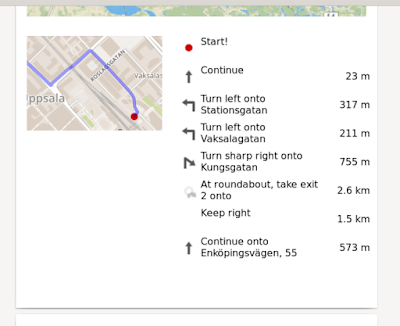 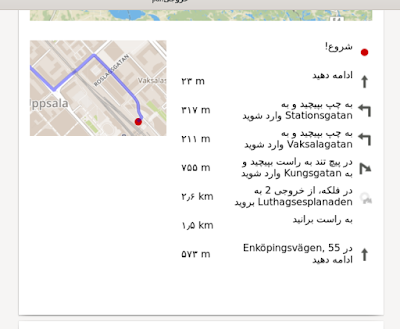 The latter screenshot showing a rendition using a Farsi locale (being RTL, using the Arabic script).

That's it for now!

Posted by Marcus Lundblad at 4:04 PM