It's been a couple of weeks now since GNOME 3.28 was realeased. I´ve already written some about the new features in Maps for 3.28. But already now there´s some exiting news looking forward. The first is not related to code or features of Maps itself. But the project has been migrated to GNOME´s Gitlab instance (along with other projects now that mass-migration of the remaining projects from Cgit and Bugzilla is going on). I think this will simplify newcomer contributions and bug reporting quite a bit. Also the code review interface for the merge requests looks pretty nice.

The other big news is that Maps is now built using Meson. Even though the amount of compiled code (the private C library we use for interfacing with things like libxml2 and libfolks, which doesn´t natively support GIR bindings) is quite small, I still think build times are noticeably quicker now. I decided to remove support for building using Autotools right away, since we had some shell:ish magic going with installing our icons where shell sub process ran cut to parse file names into path destinations based on splitting on underscore characters. So I took the opportunity to clean this up and move the icons into suitable directory structures directly in the repo. I didn´t think it was worth the effort to “back-port” this the Autotools build system, so from now on master can now only be built with Meson (ofcourse on the stable “gnome_3_28” branch building is done the old way using Autotools).

Unfortunately we where out of tile access from Mapbox for little over a week recently, but a couple of weeks ago the GNOME Foundation board has voted to set aside a budget for tiles, so things should be good now.

And also since it´s boring writing blog posts without any screenshots, and in three weeks I´m going to San Fransico with work. I loaded transit data from MUNI in my OpenTripPlanner server instance and did some cable car “browsing”, notice the nice little icons (made by Andreas Nilsson): 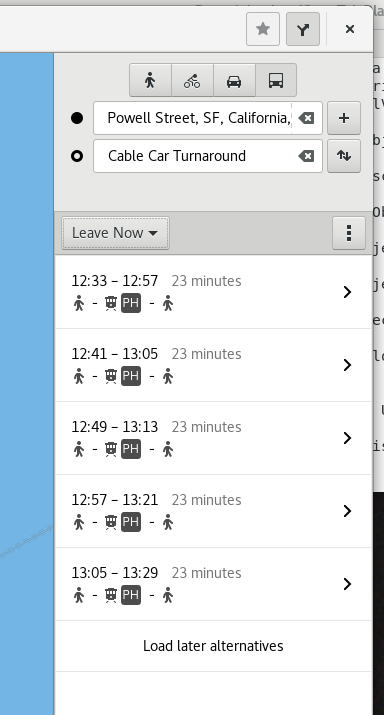 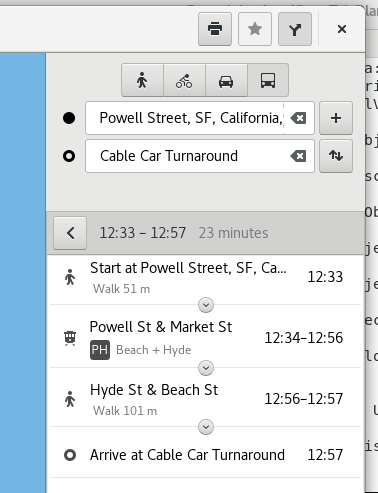 Posted by Marcus Lundblad at 10:28 PM