So, it's been a while since my last blog post.

Some work has been done since the release of 3.26 in September. On the visual side we have adapted the routing sidebar to use a similar styling as is used in Files (Nautilus) and the GTK+ filechooser. 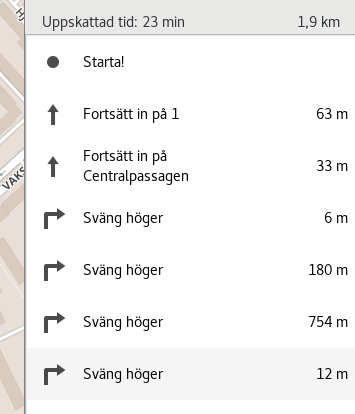 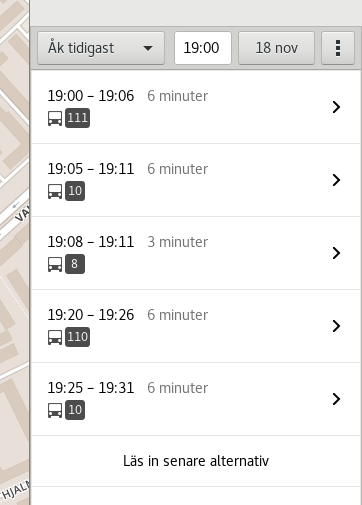 I also took the oportunity to improve the looks of the transit route labels when using a dark theme variant: 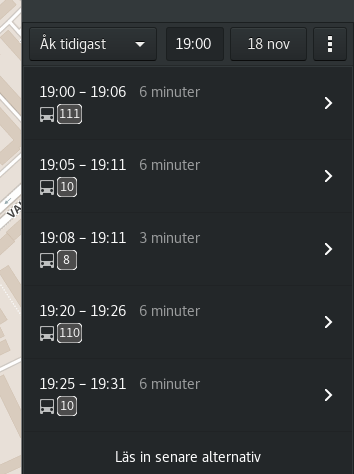 So that now the labels will get an outline in the lighter text color when the background is dark (the opposite compared to when using the regular light theme variant).

Another small improvement is that we now support the common --version command line option to… well, show the version number :-)
Also, the copyright date in the About dialog has been updated (since it hadn't been since 2013…).

Under the hood, and not immediately visible, I have cleaned out some cruft that generated a lot of run-time warnings about superfluous function arguments  (either the Javascript GIR bindings expected extra error “out parameters” before, or GJS just has gotten more verbose about these things).

I also started playing with some newer ES6 features, namely closures (so avoiding declaring an inline function using the “function” keyword and binding this to the scope, and rather do something like () => { do_suff_here; } when declaring signal callbacks and such. And the other thing being using ES6 classes (and the new GObject syntax in GJS.

And this not only makes the code nicer to read (IMO) it also cuts down on the LoC count a bit:

It's not only been hacking lately though, I had a nice video conference with representatives from Mapbox to discuss ways we could give back to them in return for their generousness towards us. I have some ideas about features we could implement in Maps that they were interested in. This is something I will most likely bring up again in a not too distant future.
Posted by Marcus Lundblad at 9:55 PM